The thing I am most thankful for is that terrible 2020 is nearly over. For Christmas, I want a better 2021--and a Covid shot, but I'll have to wait my turn, probably months. Of the year in review, I can only say for lack of anything else to do, I completed four books. Daughter of the Rainbow, The Double Dilemma, and The Greatest Prize, all in the Longleigh Chronicles, and The Aussie Sinner, the newest Sinners title.  The first two came out in the spring, Greatest Prize in December, and Aussie Sinner will be available in late January. I'm also nearly done with The Bad Boy Sinner. Evidently, all writers were just as productive as one of my editors was not thrilled to get my manuscript for Aussie Sinner, saying they were slammed with editorial work. As a result of that, it moved through the lengthy publishing process like maple syrup on a cold day. But, that's okay. I don't plan to do as much next year and do plan to have another hip surgery.  If that is successful and Covid gives us a break, I'll be hitting road again, not spending every day writing.

Christmas is the one time of year we get together with our three grown children, their significant others, and the grandkids, not always at our house as we take turns hosting, but still together for present opening, meals, movies, and games.  None of that this year, so I am feeling a little blue. I told my husband I didn't want a tree or any decorations.  I didn't plan to make a huge dinner or do any baking, but he brought home a small tree anyhow--which then had to be decorated with one string of lights and about a quarter of our ornaments. A relative sent a large balsam wreath which we put on our fence. A friend stopped by with cookies, so I had to reciprocate by whipping up batch of my easiest to make treats. Christmas just won't let me alone to brood as I'd like.

The tree is not the best we've had, but certainly not the worst. One year, we took the kids to a tree farm to cut our own.  Out in those field, all the trees seems kind of puny so we settled on the biggest we could find.  When unfurled in our room, it took up half the space and required oodles of ornaments. Note to self, trees look much larger indoors.  Perhaps our biggest folly was waiting for our freshman daughter to come home from college to get a tree.  She arrived just a few days before Christmas--and lo and behold, the lots in our town were empty and shut down. So, we piled in the car and drove to the next town over which also appeared denuded of pine trees except for a sign in the window of a mom and pop sandwich shop which said, "We have Christmas Trees."  We piled out of the car and were shown to a small lot behind the store where three trees remained, none of them big or grand, mostly small and yellow.  We took the best of them which I swear shed half its needles on the way home. Covered with lots of lights and ornaments, it wasn't awful, but even my daughter said not to wait for her next year.

There, recounting Christmases past has lifted my mood a little as will the Zoom get together we plan for tomorrow.  As I say to everyone these days, stay safe and well.  Here's treat for the eye for all of you, the cover of The Aussie Sinner already up for pre-sale on Amazon. 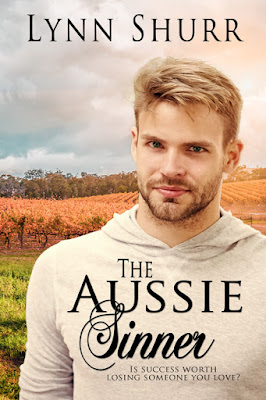