Authors live for positive reviews. We ask for them, beg for them, plead for them, and usually don't get them. Way back in beginning of my publishing career nine years ago, I could depend on a few relatives and some fellow writers posting some kind words for my books.  But, Amazon banned reviews from relatives and the trading of reviews between authors even though I have one child that never gave my books more than four stars and another who always wrote a very balanced review. As for my mom, she said my books were good but never posted anything about them. I think she didn't even tell her friends. Supportive she was not. Frankly, I am relieved I don' trade reviews with authors I know anymore. I once gave only four stars, and that person is still mad at me. If I'd been entirely honest, their book was three stars at the most.
Since I write for small presses, neither them nor I can afford to send out hundreds of free copies in order to garner a handful of reviews as big New York publishers do.  To give an idea of how many books must be read to get a bunch of reviews, I did a KDP with one of my best. Ten-thousand copies were given away for free in a few weeks. How many reviews did I get?  Forty.  I have also done the contest thing, giving away one free soft cover copy which then has to be mailed. I always enclose a friendly note asking the winner to drop a review for me on Goodreads or Amazon if they enjoy the book, As far as I know, none ever has, leading me to believe they didn't enjoy the book or never read it in the first place.
For a while there, a myth prevailed that if a book could get ten reviews, not as easy as it sounds, Amazon would promote it more heavily.  More recently, some claim if you can get fifty reviews, they will make your book a part of their permanent catalog. I doubt both. If mine manage to get more than ten reviews, it is usually because a controversy has ensued. One of my books, The Convent Rose, was trolled badly the second it was released by a person who didn't even have the name of the hero right and intentionally garbled  the plot to make it seem foolish. Fans I didn't know I had came forth to defend it. Likewise, when Ashy Affair was released missing half its pages (the e-book only), a publishing error, not mine, it was badly attacked. Though I contacted each reviewer and told them to ask for a corrected free copy, only two did. The others didn't take their bad reviews down. Slowly, those who read the entire book got it up to four stars. Controversy--a hard and hurtful way to get reviews.
The difficulty of getting reviews for indie or small press authors has created a whole new industry.  The author shells out money for a company to put up an e-copy of the book free for a length of time in return for a fair review. Net Galley is one such business. I have no quarrel with them, but they are expensive to have a book up for a month. One of my publishers purchases space and prorates its authors for a week or two if they want to participate. I've done this several times and reaped two to four reviews from total strangers who rewarded me with four or five stars--and best of all vowed to read more of my books. However, this effort usually stalls out at no more than four reviews that come to twelve dollars apiece paid to the company, not the reviewer. Recently, I tried another, paying $125 for a month of exposure, ten reviews guaranteed or your money back.  So far, zilch reviews. Might be taking them up on that refund. Sure hope they aren't a scam.
Often, when I am signing or trying to hawk my books on Authors Rows or at arts and crafts fairs, people do come up to me and tell me how much they liked a particular title or series. Some of these folks I know, some not. I always ask them to post their kind words in a much needed review. Few do. Most people seem to have a phobia developed in grade school and connected to writing book reports. I did have a person who said they couldn't post a review online for all to see but sent me a five page, hand-written  book report. It was lovely.  I still have it.  But, it did me no good as I can't post it myself. Really, the review need only be a few lines, what you loved or didn't love about the book. I keep the latter in mind when writing my next book. I listen to my readers.
My new historical came out last week, Lady Flora's Rescue. So far, not one review. Nope, I do not expect even my fans to drop everything and read it immediately, but please do so in the future and give me what I need most--a few encouraging words. 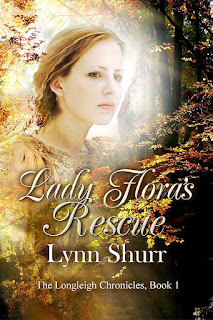