Back from Down Under

I left for my bucket list trip to Australia at the end of November without giving this blog a thought, but the journey did give me something to talk about other than writing. If you want a day to day account, friend me on Facebook. My husband took lots of great pictures, too. I'm not even going to pretend that my royalties paid for this trip. The cost was paid off monthly since last year and worth every penny from Enhanced Tourist Class on the plane which gave me extra leg room and great snacks plus a glass of sparkling wine to start the journey to watching the penguin parade and hand-feeding kangaroos.
I was able to establish the Aussie character when a big six-footer reclined his seat into my lap for the eighteen-hour flight. Around two a.m., I desperately needed the restroom and found I was trapped. Afraid I would wet myself, I began shouting, "I can't get out!" and probably woke up half the plane including the guy in front of me who finally put up his seat, let me go, waited until I got back, and fully reclined again. Little did he know women my age need the bathroom every two hours. Each time I tapped him, he good-naturedly let me out again, then resumed his position. When I needed some food around six a.m. to take some meds, the staff provided me with a ham and cheese empanada. He put up his chair so I could get my tray out--and asked for the same. Honestly, very nice but not overly sensitive people. I have to say always willing to help and give directions as we found throughout our trip. Give up a seat on a crowded tram, nope, but share a table with you in a crowded restaurant--no worries. Sit yourself down.
I did gather information for a Sinners book I plan to call The Aussie Sinner. Yes, there are Australian Rules Football players in the NFL, mostly kickers, but I want mine to play a different position if I can ever figure out what that is. Must get a copy of Aussie Football for Dummies soon, though I viewed several Footy games on the Footy Channel while recuperating from the day's activities. Only thing the games seem to have in common is having a ball of the same shape. Fun to watch as these very fit young men play in shorts with no padding flat out for their quarters, throwing themselves into piles to rip out the ball and sending it flying with a kick to the other end of the field. Our Melbourne guide, Peter, gave me lots of details on the sport as the game originated in that city which has nine teams of its own. I do need to give him a credit when the story comes out, probably in late 2020 so don't hold your breath.
Meanwhile, The Heart of a Sinner is now up for pre-sale on Amazon and will be released on January ninth. This came as complete surprise to me as it hadn't been given a release date before I took off for the Land of Oz. That should tide you over along with Dream for a Sinner which I left nearly finished in order to take my trip. I do love to write, but traveling is even better. Here's a cover for you. Now I have to get back to cookie baking and present wrapping, both, like Dream, sorely neglected while I dined on kangaroo and flirted with platypuses. Merry Christmas and Happy Holidays to one and all! 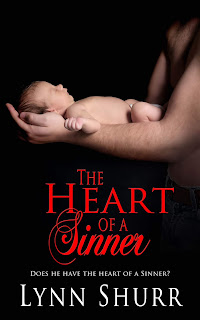 Posted by Lynn Shurr at 3:08 PM No comments: